Pai told the WISPA members, "There is always a WISP willing to do the job. When we saw the results of the [Connect America Fund Round II] auction, I was thrilled to see WISPs get over nine figures of funding to build out high-speed connections in rural areas.

Said Redl: "WISPA members are a critical part of the wireless ecosystem. You are helping us solve not only our problems in using spectrum more efficiently, but also in bringing broadband to those who desperately need connectivity."

One of the most talked-about subjects was “CBRS,” the Federal Communications Commission’s upcoming Oct. 23 vote to rewrite the rules in the Citizens Broadband Radio Service (CBRS) spectrum band (3550-3700 MHz). Over the last year, the FCC has considered replacing the pro-small, pro-rural, pro-innovation rules adopted by the FCC in 2015 with rules that would favor the large mobile wireless carriers and put CBRS licensed spectrum out of reach for smaller ISPs.

In his first address to WISPA’s mostly small, rural members, the organization’s new President and CEO, Claude Aiken, said, “I want to assure you that our entire team will be working right up to the day of the vote, on several fronts, to maximize the opportunities for fixed wireless operators to access more spectrum and serve more consumers in under-served areas.”

The FCC’s regulations were the focus of numerous packed sessions at WISPAPALOOZA 2018, the association’s annual autumn gathering, which ran from October 8-12. Almost 100 other sessions delved into an array of business and technical issues, imparting all kinds of knowledge needed to run WISP businesses effectively. On “Fiber Friday,” fiber equipment manufacturers and consultants offered educational sessions to nearly 300 operators who are now or soon deploying fiber to the home (FTTH) in addition to wireless services. Other certification and training sessions were offered before and after the show.

This year’s event was the association’s largest ever, with more than 2,200 attendees, 43 sponsors, and 163 exhibitors selling wireless and tower technology, software, cloud services, VoIP solutions, consulting, mapping services and more. All of those numbers represent new high-water marks for the rapidly growing association.

The WISP industry is comprised of more than 2,000 mostly small- and medium-sized businesses, serving more than 4 million customers across the United States in mostly rural and under-served areas. According to industry analyst Jimmy Schaeffler of The Carmel Group, the number of fixed wireless subscribers is projected to more than double to 10 million by 2023, making this the country’s fastest-growing broadband access technology. Fixed wireless also is the most cost-effective broadband access technology, as networks can be built quickly and at a fraction of the cost of other technologies.

The sector’s positive outlook is also reflected in the fact that more than 15 fixed wireless companies won funding in the FCC’s recent “reverse auction” for rural subsidies; six members secured spots on the INC 5000 list of fastest-growing companies; and the industry won two major awards from Fierce Wireless. 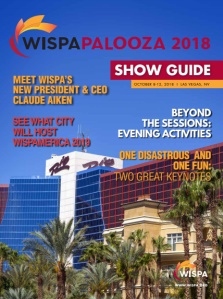 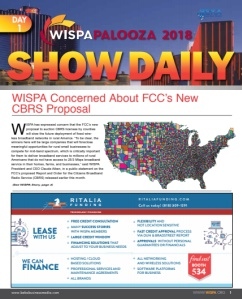 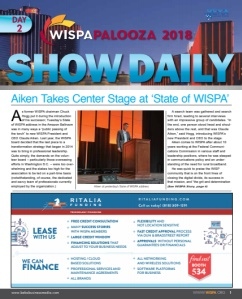